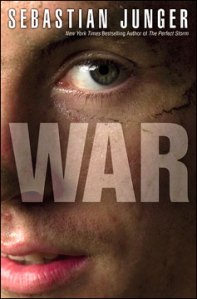 grandiose since I don’t think Junger delivers the truth of War, but I do think it is a very good book and certainly the best thing, in a relatively limited sample, that I’ve read about the American experience in Afghanistan.

Junger avoids political pronouncements in preference for a close examination of the individual experience of the soldier at war, and even more particularly on the soldier in the combat zone.   Indeed, I think to some degree that the book might more appropriately have been titled “Combat,” since it is really focused not on the large scale strategy, tactics or mechanics of carrying out a war, but on the men at the point of the spear who live under fire or the threat of it.

I’m interested in a lot of things about this book, but most particularly on Junger’s concentration on the supremacy of the combat unit, the squad or platoon through whom the basic bloody work of military strategy is made real.  Junger emphasizes the fact that survival and success in combat depends on every individual soldier deciding repeatedly, if unconsciously, that the lives of other members of the team are more important than his own.  Indeed, in what was to my mind Junger’s most startling claim,  courage in battle must be understood first and foremost as a form of love:

Combat fog obscures your fate–obscures when and where you might die–and from the unknown is born a desperate bond between the men.  That bond is the core experience of combat and the only thing you can absolutely count on.  the army might screw you and your girlfriend might dump you and the enemy might kill you, but the shared commitment to safeguard one another’s lives is unnegotiable and only deepens with time.  The willingness to die for another person is a form of love that even religions fail to inspire, and the experience of it changes a person profoundly.  What the Army sociologists, with their clipboards and their questions and their endless metanalyses, slowly came to understand was that courage was love.  In war, neither could exist without the other, and that in a sense they were just different ways of saying the same thing.  According to their questionnaries, the primary motivation in combat (other than “ending the task”–which meant they all could go home was “solidarity with the group.”  that far outweighed self-preservation or idealism as a motivator” (239-230).

Junger connects this even to the solidarity of the group in the pursuit of killing.  Killing in war is not primarily about the hatred or dehumanization of the enemy, idealism about causes, patriotism for country.  It is more primordially about saving the lives of those you love.

Junger’s depictions and ruminations here are convincing to me, quite apart from my own convictions about personal or state violence, and they do give me pause over a particular conundrum.  American life is so thoroughly characterized by individualism and self-promotion.   And yet life in combat–which is in some ways also seen as quintessentially American–is by Junger’s accounting absolutely about self-effacement in some profound and existential way.  I was reminded of the controversy over The Hurt Locker

where veterans of bomb squads were deeply troubled by the individualistic and cowboy renegade image that was projected by the protagonist.  Reading Junger, I understand that complaint more clearly now.  The individualistic hero who strikes out on his or her own at apparently great risk to himself and others is a Hollywood figure, but one who, if univeralized, would very quickly mean the absolute destruction of a fighting the unit, the opposite of the kind of sacrificial heroism that Junger believes is a characteristic not of exceptional persons in combat, but the fundamental nature of what makes combat possible at all.