There’s a remarkable consistency in the way that readers write about their libraries.  Tropes of friendship, solace, and refuge abound, as well as metaphors of journey and travel that tell the tale of intellectual sojourn that books can occasion and recall for their readers.  Though I cannot recall the details of their first readings, I still treasure my Princeton paperback editions of the work of Soren Kierkegaard, the now ratty Vintage-Random House versions of Faulkner with their stark 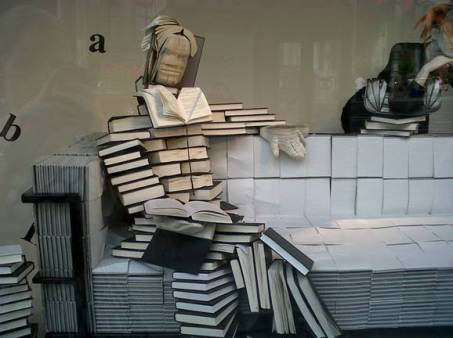 Man made of books

white on black covers and yellowing pages,  my tattered and now broken copies of T.S. Eliot’s The Waste Land and Other Poems, and his Selected Essays, held together by a rubber band, the band itself now so old it threatens to crumble into dust.  I keep these books now, not so much because of the information they contain.  Even the notes I’ve written in them aren’t all that entertaining and hold only a little nostalgic value:  I was a much more earnest reader as a younger person, but also duller, less informed, and more predictable, at least to my 51 year old eyes.  Still, these books are the talismans of a journey, and I keep them as stones set up to my memory of that journey, of the intellectual and imaginative places I’ve come to inhabit and the doorways I passed through to get here.  In that sense, a library represents both time passages and the attendant loss as much or more than they represent the knowledge and the information that has been gained.

Ariel Dorfman has a very nice meditation on the relationship between his library and his intellectual, political, and material journey in the September 23rd edition of the Chronicle Review.  In it Dorfman tells the story of his lost library, a library that he had to leave behind in Chile at the beginning of his exile.  The library was partially destroyed in a flood during his absence, and then partially recovered again when he returned to Chile in 1990.  As with many memoirs of reading, Dorfman understands the library as a symbol of the self.

Those books, full of scribbled notes in the margins, had been my one luxury in Chile, companions of my intellectual voyages, my best friends in the world. During democratic times, before the military takeover, I had poured any disposable income into that library, augmenting it with hundreds of volumes my doting parents acquired for me. It was a collection that overflowed in every impossible direction, piling up even in the bathroom and the kitchen.

It was a daily comfort, in the midst of our dispossession in exile, to imagine that cosmic biblioteca back home, gathering nothing more lethal than dust. That was my true self, my better self, that was the life of reading and writing I aspired to, the space where I had been at my most creative, penning a prize-winning novel, many short stories, innumerable articles and poems and analyses, in spite of my own doubts as to whether literature had any place at all in a revolution where reality itself was more challenging than my wildest imaginings. To pack the books away once we fled from the country would have been to acknowledge our wandering as everlasting. Even buying a book was proof that we intended to stay away long enough to begin a new library.

But, of course, Dorfman did begin a new library in his many years of exile, and his Chilean library was altered not only by the natural disaster of the flood, but also by the human transience whereby Dorfman himself changed and so changed his relationship with his books.  The changing shape of Dorfman’s library becomes an image of historical and personal change that must finally be embraced since it is unavoidable.

Six months later I had left Chile again, this time of my own free will, this time for good. I have puzzled often how I could have spent 17 years trying to go back and then, when I did indeed return, I forced myself to leave. It is still not clear to me if it was the country itself that had changed too much or if I was the one who had been so drastically altered by my exile that I no longer fit in, but whatever the cause, it left me forever divided, aware that my search for purity, simplicity, one country and one language and one set of allegiances was no longer possible.

It also left me with two libraries: the one I had rescued back home and the one that I have built outside Chile over the years and that is already so large that not one more new book fits in the shelves. I have had to start giving hundreds of books away and boxing many others in order to donate them to Duke University, where I teach. But no matter how many I get rid of, it does not look likely that there will ever be space to bring my whole Chilean library over.

And yet, I had already lost it once when I left my country and then regained half when that phone call came in 1982, and rescued what was left yet again in 1990 and can dream therefore that perhaps, one day, I will unite some books from Santiago with the thousands of books bought during my long exile. I can only hope and dream that before I die, a day will come when I will look up from the desk where I write these words, and my whole library, from here and there, from outside and inside Chile, will greet me, I can only hope and dream and pray that I will not remain divided forever.

It’s possible, of course, to lament our losses, and I suppose in some sense the vision of a library of the self is a utopian dream of resurrection wherein all our books, all the intellectual and imaginative doorways that we’ve passed through, will be gathered together in a room without loss.  But I also sense in Dorfman’s essay a sense that loss and fragility is one part of the meaningfulness of his books and his library.  I know that in some sense I love my books because they are old and fragile, or they will become that way.  They are treasured not only for the information they contain, but for the remembered self to which they testify.

I started this post thinking I would focus on the ways we sometimes talk about the ephemera of electronic digital texts.  There is something to that, and we’ve discussed that some over at my other group blog on the Digital Humanities.  At the same time, there is another sense in which e-texts are not ephemeral enough.  They do not grow old, they are always the same, they cannot show me the self I’ve become because that implies a history that e-texts do not embody.  While looking at my aging and increasingly dusty library, I feel them as a mirror to the person I’ve become.  Looking at my e-books stored on my iPad I see…..texts.  Do they mirror me?  Perhaps in a way, but they do not embody my memories.

If I give a book away to  a student, I always miss it with a certain imaginative ache, knowing that what was once mine is now gone and won’t be retrieved.  Somehow I’ve given that student something of my self, and so I don’t give away books lightly or easily.  If I give a student a gift card for iTunes….well, perhaps this requires no explanation.  And if I delete a book from my iBooks library I can retrieve it any time I want, until the eschaton, one imagines, or at least as long as my iTunes account exists.

5 thoughts on “Libraries of the self: Or, are print books more ephemeral than e-books, and is it a bad thing if they are?”