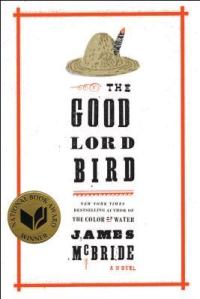 “The Good Lord Bird” is a book I ought to like. I liked McBride’s first autobiography, “The Color of Water,” an appreciative remembrance/meditation on being a black man with a white mother. I liked McBride personally when he visited Messiah College. He is a fantastic musician, whose passion for music I share. Like most America’s I’m intrigued by the fanatical John Brown. The novel’s theme is race in America, the fatal subject of many of the greatest American novels from Moby Dick to Huckleberry Finn to Absalom Absalom to the Invisible Man to Beloved. It’s James McBride’s fourth book, about the time in a career when one starts to see signature work produced. It was chosen for the National Book Award. Everything things about it says BIG. Good writer, big book, big subject.

But the book left me cold.

Well, really somewhat more than lukewarm, which feels like cold when you are eagerly expecting greatness. I liked many passages. It was better than watching netflix…most of the time. But I expect more than that from a National Book Award Winner, and couldn’t help but wonder what the judges were thinking, though it also crossed my mind that American fiction must have been in a bad way in 2013 if this was the best we could produce. Apparently this thought crossed McBride’s mind as well since, according to the Times story on the 2013 NBA ceremonies, McBride was stunned to have won and didn’t even prepare a speech.

The book has often been compared to Huckleberry Finn. indeed, the novel’s cover insists on it, evoking the ubiquitous straw hat that seems to accompany every edition of the novel and rendition of Huck’s story since that American classic was written. Henry, the novel’s protagonist, is a cross-dressing early adolescent struggling to find his own way and own identity in a world full of people who impose their vision of what he is or ought to be at will. There is no river–a good bit of the novel takes place in the plains of Kansas and Iowa, in its own more desiccated way as stark brutal and unforgiving a wild thing as the Huck’s Mississippi. In a different sense, John Brown himself is Henry’s river, a wild thing, a force of nature with a logic and will of his own that bends things to himself, like a Kansas tornado or a Mississippi flood, and does the bending in part through his own fanatical certainty in the will of God.

But the differences between Huckleberry Finn and The Good Lord Bird also point to the latter’s narrative problems. In Huckleberry Finn, the river is a character of its own, but it is never the character that we care about. From the opening sentence we know we care about Huck Finn and coming to know him. The river is finally an occasion for the main narrative character, and not the other way around. If the river drives Huck through coincidence, or if Huck follows it where it carries him, finally the reader follows Huck, only sticking with the river because of that human story. In The Good Lord Bird I could never muster a lot of concern from Henry, who followed John Brown for no good reason, didn’t seem to want to be there, and didn’t seem to learn all that much by his travels. In the Times story cited above, McBride says he enjoyed writing the novel because “It was always nice to have somebody whose world I could just fall into and follow him around.” The novel has that feel. That Henry is just falling in to the world and following John Brown around for no reason we can adequately figure out. In this sense, the novel feels all the way through a bit like Huck Finn feels in its disappointing conclusion, when Huck Finn, who has captured our imagination and matured before our interior eyes, turns freedom and maturity into a banal melodrama at the hands of his would-be mentor, Tom Sawyer.

In the acknowledgements section at the end of the book, McBride thanks the many who kept the memory of John Brown alive. I’m not sure this book will do that very well. When, for the space of several dozen pages in the middle of the novel, John Brown disappears from the scene and Henry is left to his own devices, we realize we just don’t care that much about him. And if Henry is not himself a compelling character, if Henry is not more than an empty sleeve of a boy becoming a man, then we can’t really find John Brown all that compelling either. Adolescents drifting through life are compelled by many things, some of them profound, many or most of them not. John Brown is a terrifying and complex figure in American History, one that Americans still feel uncertainly as both a brutal terrorist and a freedom fighter, and feel this contradiction all the more so in that Brown was indeed on the right moral side of the arc of history when it comes to the story of race in America, unlike so many other of our white founding fathers and mothers. But because Henry does not himself seem to struggle in any meaningful way with the desperate question of whether in pursuing freedom we are winging into flight or stumbling over a precipice, we ultimately don’t feel in this John Brown the terror that can be the birth pangs of freedom. Instead, McBride’s John Brown seems to shift uncomfortably between being a joke and being meaningfully sincere.

A worthy subject for a netflix melodrama, but I was hoping for more.