I was talking to a couple of students yesterday, one of whom wants to be a librarian because she loves “being around books.” A little bit of a Scrooge, I guess, I told her she better get used to being around computers since that was the real future of libraries, taking her back a bit with my revelation that the library budget at our own college had just been required to move $50,000 from book purchasing to database collections. Small change for a lot of places, but for my smallish college $50,000 is nothing to sneeze at. Indeed, I’ve already felt the squeeze just a bit since English used to depend on the general fund of the library to order contemporary novels and poetry–which we ordered gleefully and at will. Probably partly on the erroneous assumption that availability would somehow translate into their being taken off the shelf. Well, that fund hasn’t disappeared, but we’ve been asked to order not quite so gleefully, and not quite so at will. A concrete manifestation of how a response to a perceived technological need–real or not–will gradually determine or close the future of the book as we’ve known it.

Still, my student was not dissuaded. She feels that books will always be with us because we love their physicality. There’s that body of the book theme again, and there’s something real about it that has to be thought through. Reading is not simply a mental process of decoding letters, not simply a process of getting information off a page or screen and in to our brains. It’s a physical activity to which we attach all kinds of cultural and personal meanings, a kind of spiritual reverence that the attach to the being of books that we cannot yet attach to computers.

We imagine computers too much as tools, and emphasizing their efficiency does too little to address the tactile, even the olfactory meanings that we attach to book culture. The other student who was with us was very intrigued by Amazon’s Kindle, but even she paused and said, “I became an English major when I looked out from the balcony and saw the stacks and stacks of books.” The physicality of books inspires a reverence, whereas the efficiency of computers inspires…what?…a sense of efficiency?

Indeed, I’m intrigued by the growing tendency of laptop users to try and personalize their laptops–recreating their essential impersonality through a kind of personal graffiti. There’s a great newstory on this phenomenon at c/net, along with 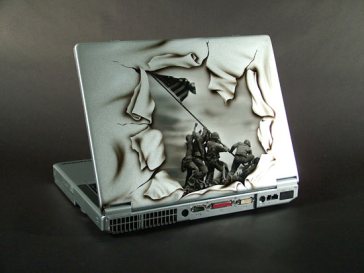 We do this with books, it seems to me, but not in the same way. We don’t feel compelled to personalize the cover of a book, and our markings in a text are more to memorialize a reading experience than to carve a human personality into what is, after all, a machine. Books are a technology, but at the least we have learned to experience them as extensions of the body rather than as tools.

Along these lines, I’ve been running in to a lot of images of books again. Rachel Leow over at A Historian’s Craft celebrates the one year anniversary of her blog with BookPorn #27, a couple of fabulous images of the Library of the Musee Guimet. Says Rachel: 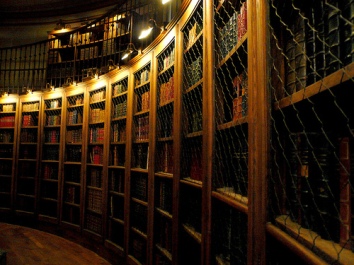 “There’s a kind of hushed atmosphere when you walk in: the lights are dim and people shuffle about, struck silent with reverence, or perhaps the disconcerting, all-pervading pinkness of the walls and columns. The books lie, untouchable, behind their wire cages, and the smell of old paper lingers about well after you step, blinking, back out into the fluorescent glare of the exhibition outside.”

Nice writing, Rachel. And happy birthday. It seems to me that Rachel gets at this notion of the importance of the physicality of books inspiring a kind of reverence, something I attach even to my tattered paperback crowded onto basement shelves, but which I don’t really attach to my computer. Like nearly everyone else, I’m sure I spend a great deal more time on my computer reading anymore than I do in actually reading books. Like most white collar workers I’m chained here all day, and then blog all night. But feeling reverence for my computer feels a little bit like feeling reverence for my screwdriver. Not impossible, I guess. I’m sure many a carpenter has a deep feeling for his screwdriver. But I also guess that mostly such carpenters are considered weird by everyone else.

Books are tools, but it’s a mistake to think that what counts in reading them is the toolishness. If we only focus on the instrumental qualities associated with text delivery, there is no question that the e-book-o-philes among us are right to scoff at fears of digital libraries. Still, culture is more than instrumental, and always has been.

Along these lines, there’s a humorous and very interesting

skewering of those of us who are book fetishists over at if:book. Chris Mead has written a song about the history of books along with a lot of great images. My favorite is this from Giuseppe Acrimboldo, “The Librarian.” I love it. The human is text, no a book, a library. What I’ve always thought anyway. I am my books. I don’t yet say, I am my computer. Will I ever.

“words: written in silence, muttered in monasteries
have been sung, shouted, acted – now by digital industries

broadcast and mixed for our burgeoning multiculture,

but circled by many a gloom-laden vulture

crying “R.I.P. books: doomed to extinction
by some blinking e-inky, i-evil invention”.
The word spreads and
changes; that’s my belief.
What next for the book?
The future lies overleaf.

Very nice. Dr. Seussian. Ok, only almost. Still, Chris’s poem/song emphasizes an assumption that I think is flatly wrong. That the technology of reading is essentially inconsequential for the act of reading itself. This is clear explicitly in the opening part of his poem.

“Books are what a society carries its words in
and words have been written on stone, silk, slate, parchment,
wax, clay, screen and skin,”

This is superficially true, but the assumption seems to be that reading is only about decoding letters, and books–or parchments or scrolls or screens–are merely delivery systems that are more or less equal except in the efficiency with which they can deliver text to readers. This is flatly false, as any historian of books and reading could point out in half a breath. In some sense, when we went from reading scrolls to reading codexes and then books, the changing technology changed the meaning of the act of reading, not just the techniques of the act of reading. It is this changing meaning that is crucial to try and understand. Techniques of text delivery can merely be learned through users manuals. Meanings and their attendant ways of being human are less easily learned and unlearned. We ought to pay attention to what those changes might be.

Final note: I’m sure everyone’s familiar with this video, but it still makes me smile. It’s a reminder that all of the cultural associations we have with books had to be learned. There’s nothing natural about our sentimental attachments to books. As kids, we’re all in the position of the monk at a loss here, not knowing which way a book sets on the table, which way to turn the pages. Culture is learned. That doesn’t mean the demise of books should be sniffed at. But culture is learned.

1 thought on “Books in a material world–Bookporn and more”