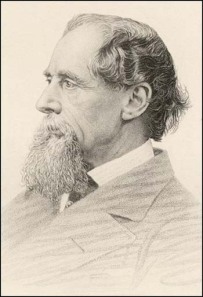 Hard Times is one of those books that English teachers make you feel bad about not liking.

Oh, I forgot. I am an English teacher. What to do that I found what some people call Dickens greatest novel so dull that it was not even engaging enough to be a soporific (Side note about falling asleep to books, books make us fall asleep best not when they are dull but when they are engaging enough that they take us to the edge of dreaming).

Seriously though, consider the first lines “Now, what I want is Facts. Teach these boys and girls nothing but Facts. Facts alone are wanted in life. Plant nothing else, and root out everything else.”

Isn’t it plain from this moment that the game is rigged. Who could not know that the speaker is a grind–well actually a Gradgrind–that he will get his comeuppance, and that the virtues of truth beauty and the imagination will out.

And, not to put too fine a point on it, that’s mostly what you get in this novel. The Gradgrinds, Bounderby, the Blackpool’s, they exist to tell us that industrialization has made the world go awry reducing everything to its material usefulness and leaving no room for the more spiritual world of the imagination embodied in things like–surprise!–imaginative literature. Of course there are details. Louisa Gradgrind marries the much older Mr. Bounderby on the basis of the practicalities of the facts and her father’s wishes, and we’re quite sure that she will be ground to nearly nothing, which she nearly is. She ameliorates her desperation by trying to help the laborer Stephen Blackpool and we’re nearly sure that Blackpool will die, which he nearly does. And then does. All parties concerned learn their lessons, including Mr. Gradgrind, who comes to realize that there’s more to life than facts, like his love for his daughter and his wayward son. Still, the love seems mostly to exist to make a point, and the point seems too familiar.

There’s nothing wrong with a thesis in a novel–I say this against all those who say novels don’t make points; I agree with those from Kenneth Burke to Wayne Booth who see fiction as a kind of rhetoric. But there is a problem with a novel whose thesis is baldly stated like an essay and whose thesis is never complicated, decomposed, challenged, reconfigured, or developed beyond what we can gather from the first sentence. (For that matter, there’s a problem with an essay written in a similar fashion).

I felt myself slogging along through the mud of the obvious and predictable, waking up just a bit when we finally get to the figure of Stephen Blackpool but descending again in to readerly despair when it’s obvious that Stephen is mostly a foil for the display of Louisa Bounderby’s sentimental charity, and later for the display of the pusillanimity and bourgeois moral corruption of Tom Gradgrind.

Stephen Blackpool and his mad wife

On the other hand, I found myself wondering whether I found this all so predictable because so much has been built on a Dickensian edifice. In other words, would Dickens’ early readers have found his book dull and predictable or perhaps instead appalling, thrilling in its view of human degradation. Do we have a responsibility as readers to recover the shock of the new in classic works when they are no longer new?

I’m not sure. And I may be trying to cut Dickens too much of a break. I have read both Uncle Tom’s Cabin and Douglass’s Narrative a multitude of times, and both are rife with moral sentimentalism, obvious bad guys, and endings that surprise only in their predictability. Yet I never find them dull. I will still be moved to tears by sections of both. So what it is it about Hard Times that leaves me cold, in the grip of something I feel I already know and don’t need to learn again, while I can read Stowe and Douglass (and Faulkner, and Hemingway, and at least some of Toni Morrison) as I read the Psalms, an ever renewing source even when I know everything that will happen.

Side Note: An interesting bit from Hard Times about reading. From the chapter where the town is beginning to hunt the falsely accused Blackpool, believing him guilty of robbing Bounderby’s safe.

“The factory-bells had need to ring their loudest that morning to disperse the groups of workers who stood in the tardy daybreak, collected round the placards, devouring them with eager eyes of those who could not read. These people, as they listened to the friendly voice that read aloud–there was always some such ready to help them–stared at the characters which meant so much with a vague awe and respect that would have been half ludicrous, if any aspect of public ignorance could ever be otherwise than threatening and full of evil. Many ears and eyes were busy with a vision of the matter of these placards among turning spindles, rattling looms, and whirling wheels, for hours afterwards; and when the Hands cleared out again into the streets, there were still as many readers as before.”

Me and My Aura

This is perhaps a fairly typical view of oral reading that occurred with regularity up until the 20th century. Now the only people who sit and listen to someone else read are either children or tony types who attend poetry readings. Still, I’m struck by the mystical aura of the word, the mystery and power that written discourse must have held for the masses of the illiterate underclass. Perhaps still holds for that matter. Still, it seems to me that the ubiquity of print has been bought at the price of its own devaluation. Indeed, the inflated presence of the word everywhere around us, where everyone and their mother can write–and indeed, where everyone does write, so much and so often, that no one really has time left to read–this glut of written verbiage has been bought at the price of writing’s (and reading’s) triviality.

Not that this dismal view applies to my own blog, of course. It’s infinitely valuable and more than worth your time. I’m sure it even has an aura.

For More of my summer’s guilty pleasures, see